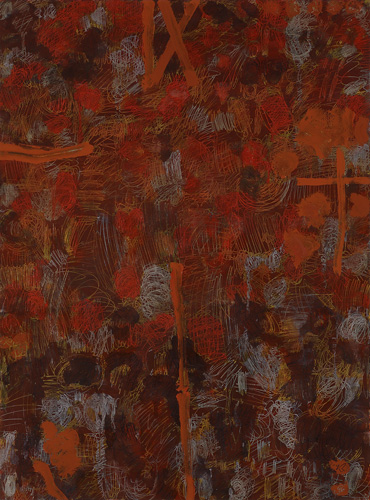 Culture Seen dropped by Gallery Jones Thursday night for the opening of the new exhibition of paintings by Pierre Coupey. In a word, the paintings are gorgeous. Culture Seen found  himself enjoying the sensation of simply sinking into them. They're full of colour with surfaces that visually vibrate with macro and micro diversity. It's one of the few times Culture Seen can recall where language has been really skillfully incorporated into a painting. In Isola San Michele IV, there are black lines and pictographic-like symbols on a surface of scribbled horizontal lines of letters and words. Partially legible as in a faded memory, they take their form from a layer of paint that is then scraped away to reveal a richly coloured surface underneath. The black marks on the top surface are placed in a way that recalls a clock face which also suggest the passage of time. The paintings form and content perfectly matches the title of the exhibition: Between Memory and Perception. Riverbank II is a big, bold oil on canvas with confident expressive brush strokes in a patchwork of colours. It too has bits of letters and other signs that appear to fade in and out of the surface. In the front window is Lorca's Bones I (for RB), a more sombre and sad work of black abstract shapes made in homage to the great Spanish poet and dramatist Federico Garcia Lorca who was 'disappeared' by the Nationalists at the start of the Spanish Civil War. The RB of the title refers to Robin Blaser, one of the country's leading poets who died last year. An American who emigrated to Canada in 1966, Blaser was part of the Berkeley Rennaissance in California along with poets Robert Duncan and Jack Spicer. Coupey is well-known in literary circles in Vancouver. He was a founding co-editor of The Georgia Straight and a founding editor of The Capilano Review. Because Coupey straddles both the literary and visual arts world, the crowd at Gallery Jones on West 3rd in Kitsilano included a mix of writers and poets along with artists, curators and arts administrators - including Kathleen Bartels, director of the Vancouver Art Gallery.

Kevin Griffin writes on everything arts, entertainment and culture-related for The Vancouver Sun’s on-line Culture Seen.