Pierre Coupey’s work, altogether natural expression of mutual affinities, for painting in various material procedures, and for the poem. Why try to understand when and how these mutualities inform one another, no need to, one can’t. What’s manifest of Coupey’s art has all along depended upon these reciprocal affinities. No acceptar otro orden que el de las afinidades, Cortázar wrote, otra cronología que la del corazón, otro horario que el de los encuentros a deshoras, los verdaderos. 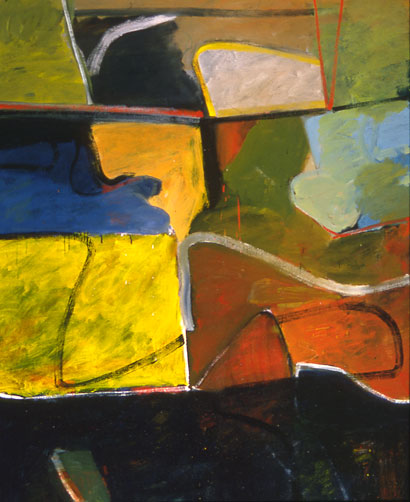 Coupey makes what’s asked of him, by what asks to be made, makes himself as particularly capable as he can of what’s asked. Discipline, instead of what’s simply a personality more deliberately expressive than usual. The visual artist Coupey, the poet Coupey, struck again and again by intuition of a textuality of being and by the absence thereof, momently able to be articulated, asking its expression, asking witness, asking observance in its every sense, asking obedience past what predictive habit of mind would conceive. What then can be made, literally, of what the provisional nature of being asks… and let it go at that, at the beautiful truth of itself, manifest, intimate, in the community.

We are persons of the old culture, which seems to make a given of ontological legibility, which has long proposed that interpretation of the text of being is the meaning of a person’s life. Our most characteristic artists have been our ultimate interpreters. Yet those very interpreters have unfailingly insisted that the experience of being is unreadable, their finest works testimony to its, and their own, illegibility. A charming (for some, not so for others) annihilation of the rule of predictive mind.

Handsome as Coupey’s work is, companionable as it is, it’s work of the present age, and no work of our age can be untroubled. But, too, it’s work of enduring, intimate loyalty to deeper sources, to the untroubled nature of that to which it testifies, that of which one is unable to speak directly: presence of the impossible, of something else than information, something other than power. Another story, of faithful affinities in imagination, timeless, a matter of love, the face of it the beautiful work, itself.

Duncan McNaughton, a leading and influential American poet, critic, teacher and editor, lives and works in San Francisco. McNaughton is the author of twelve books of poetry, including A Passage of Saint Devil (1976), Sumeriana (1977), Valparaiso (1995), Kicking the Feather (1996), and Capricci (2003). The Duncan McNaughton Papers are held in the Department of Special Collections, Green Library, Stanford University, California.