from The Point Is

The paintings and prints of Pierre Coupey are hugely pleasurable to look at and to contemplate. He brings such a breadth and depth of experience, understanding, looking, and thinking to his work. When imagining the various characteristics that could be mentioned about his art, a list of all the pitfalls that he so skillfully avoids simultaneously comes to mind. For example: his work is about process, but not blindly or dumbly so. His work is informed by his own emotional states, but not in an uncontrolled, venting or dumping kind of manner. His work relates to poetry, to text, and language, but not in any overriding sense that dominates its main function as visual art. His work is about energy, but it is a refined, almost cerebral energy, not a frenetic or raging energy. His painting is expressive, but never sloppy or maudlin. And all of these positive aspects of his art are skillfully harnessed so as to be in tune with one another. Coupey fully understands how form and content must be completely in synch, interwoven, and that an artist’s emotions must be embedded in there as well, not just sloshed in, but carefully put in place with precision and control, for the full impact of the work to then open up for a viewer.

Painting in the lineage of artists like Cy Twombly or Joan Mitchell, for example, Coupey makes a nod to the calligraphic quality that visual art’s mark making can have. But he is not hamstrung by this. Nor is he ever mannered – the works carry fresh and genuine feeling – embodied feeling. And, although the term may sound dry, in my opinion one of the most impressive features of Coupey’s paintings and works on paper is the rigor he brings to his practice. This is a value not in fashion at the moment, but one that serves him well. There is also a depth and clarity of spirit to his work; nothing is cloudy, murky, or blocked.

His painting occupies a highly intriguing place in terms of his psyche, to which a viewer readily responds. What is that place? One might consider the title of his solo show in 2010 at Vancouver’s Gallery Jones: Between Memory and Perception. It is fascinating to imagine where exactly that would be – surely some kind of dream space, in which Coupey takes pains to situate himself when working. It is in this place that the artist manages to include vestiges or faint, subtle parallels in his visual art to the activities and processes involved in writing. Or so we viewers might imagine; the marks, space, and mood are too embedded and subtle to be specific references, but are perhaps more like portals to a different sort of practice. Coupey uses the term proprioception to refer to his embodied practice – that is being in a zone in which viewers of his work might also find themselves. Our bodies themselves take our embodied minds, brains, feelings and spirits to a place of understanding and experience that is beyond reason or words. 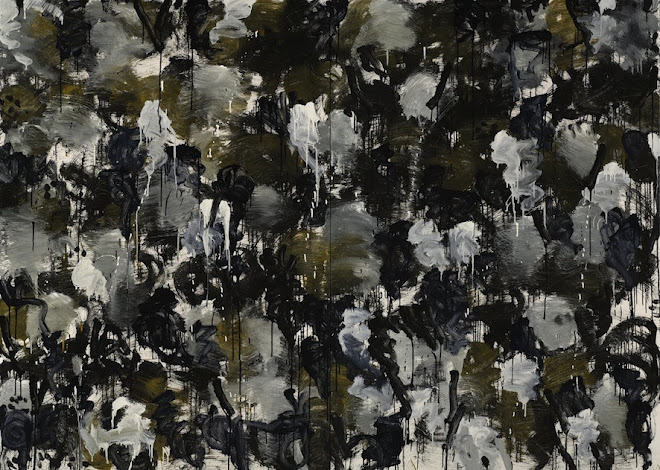 Coupey works in series, which he calls clusters, and there are examples of single works from three of these groups in this show. Komyo VIII (2008) is a vertically oriented canvas on which repeated taches of paint are layered so that there is no single focus to the composition – what Clement Greenberg termed an all-overness. The dominant colour in Komyo VIII is red, with black and grey playing secondary parts. Riverbank I (for RB), from 2008-9, is mostly black, white and grey, with bits of greenish ochre worked in, and is composed of loosely brushed shapes that read a bit like pendant wisteria blossoms, again with a democratic compositional structure. Screen I, from 2009-10, is a piece that seems to visually unfold laterally, and is made up from four square units. The horizontal bands of scratchy repeated calligraphic marks in two of the panels are contrasted with more painterly grounds in their counterparts. Over all four sections Coupey has painted just a few slightly smeared and drippy black marks in a much larger scale than the scribbles on the grounds. None of these marks read directly as anything in particular, they are abstract. But we cannot help mentally making connections to real experiences: Japanese screen painting, for example, in which the marks would be natural motifs: leaves, vines, rocks.

In fact, all three of the paintings in this exhibition have just the slightest Japanese scent or flavour, conveyed in their indeterminate space, and the feeling of spare distillation in the brush-made marks/forms. Coupey’s work embodies his own experiences of living within a body, being in the natural world and landscape, and reading and writing. In a postscript to a selection of his poems, Coupey writes in 2009: “And poetry and painting continue to be companions: they cast their shadow and light, their silences and tones, at the edges of each other.”

Liz Wylie is Chief Curator of the Kelowna Art Gallery.

Excerpted from the essay that first appeared in the catalogue, The Point Is: Pierre Coupey / Landon Mackenzie / Martin Pearce / Bernadette Phan / Bryan Ryley.