Pierre Coupey | On Poetry, Painting, and Walking the Cat Back 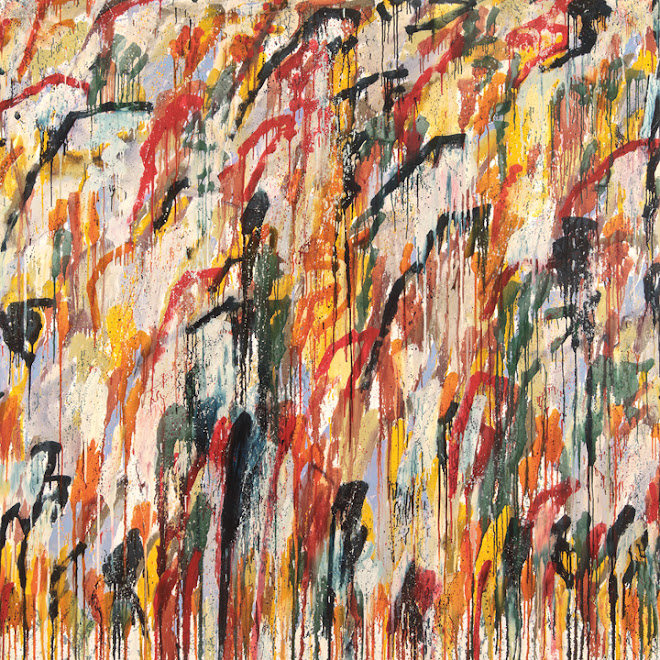 The abstract paintings in Coupey's forthcoming exhibition, Walking the Cat Back, on view at Vancouver's Gallery Jones from October 16 to November 21, are intuitive essays in paint, each a culmination of thinking and making, questioning and remembering, knowing and not knowing. Throughout the years, Coupey has painted his interpretations of history, poetry and creative process, brushing it afresh each day. –– Steven Ross Snith 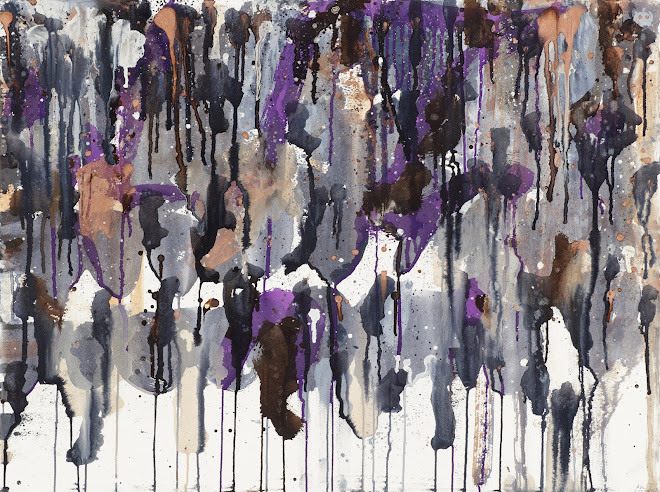 When I was a kid, Time magazine often had an art section. I would wait anxiously for the weekly arrival of that magazine. If there wasn’t an art review with images in it, I’d be devastated. Through Time, I learned about Gorky, Pollock, de Kooning, Rothko, Newman, Miro, Tàpies et cetera. In the local bookstore, I discovered a pocket series of monographs on artists, tiny books smaller than an iPhone. I assembled a collection of them. I had Modigliani, Braque, Matisse, Picasso, Bonnard and so forth. I was hungry for images. That was the beginning of my art education.

I began drawing on cardboard. Do you remember those cardboards they used to put into laundered shirts? I would steal those from my father’s shirts in his dresser drawer. My first painting materials. I’d use coloured inks on those things.

You have, for decades, engaged with language and paint as a poet, teacher and visual artist. I understand that your paintings often start with words. You include poetic and language references sometimes in titles. Can you speak about that?

I remember what bpNichol once said, and I'll paraphrase: Take a pen and make the letter ‘a’ and you’ve brought a brand new ‘a’ into the world. He was speaking of the originality of every gesture, despite centuries of language preceding us. Working with the brush as I do, I often think of painting as a kind of writing or calligraphy. Some paintings start with language, with words, a kind of colour graffiti and proceed from there with levels and layers. 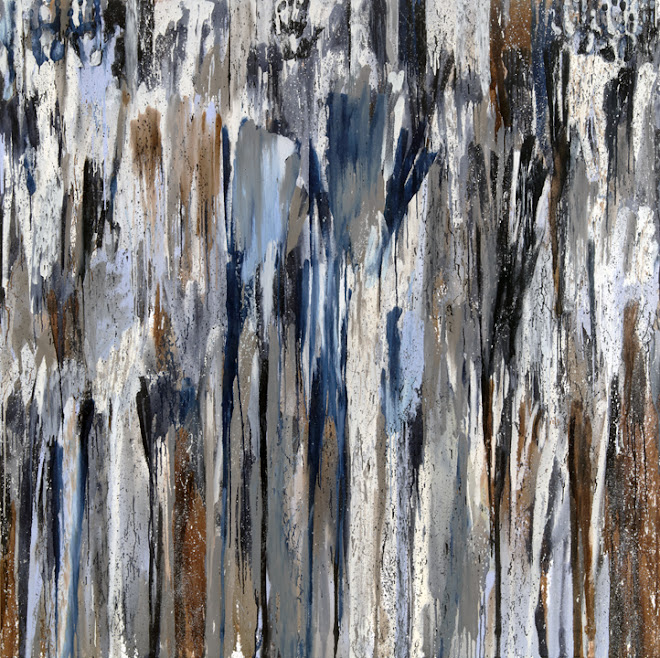 Your new show has three parts, or clusters, as you call them. Winter Poems, Algonquin and Stanzas represent work you’ve done over the last two years. I’ve referred to them as distinct essays with paint. Can you describe these and suggest how painting, landscape and history are engaged?

There are eight paintings in the Winter Poem group. The first four are 50-inch squares; the most recent four are 70-inch squares. In this group I’m exploring a sombre palette of winter tones through warm and cold whites, an array of blues and greys and blacks. I grew up in Montreal and the stark colours of winter are always with me: snow, bare trees, sudden blue skies, violet dusks, the deep blue of snowfalls at night. Winter in Montreal was always a creative time, but also a tough time to come through, and that links us to those times in history that have been difficult to survive, that test us.

You’re referring to winter, but to darker aspects of the human condition as well?

Yes, to the Holocaust and the period around World War II when images came to us in black and white. The disasters of war, what happens to human bodies through extreme violence and how to respond to such events in paintings. Two paintings by Picasso – Guernica and The Charnel House – are impossible not to deal with as a painter when you're working in black and white, and with these subjects. How do people survive times like that, how do we rebuild? Art helps, I think. 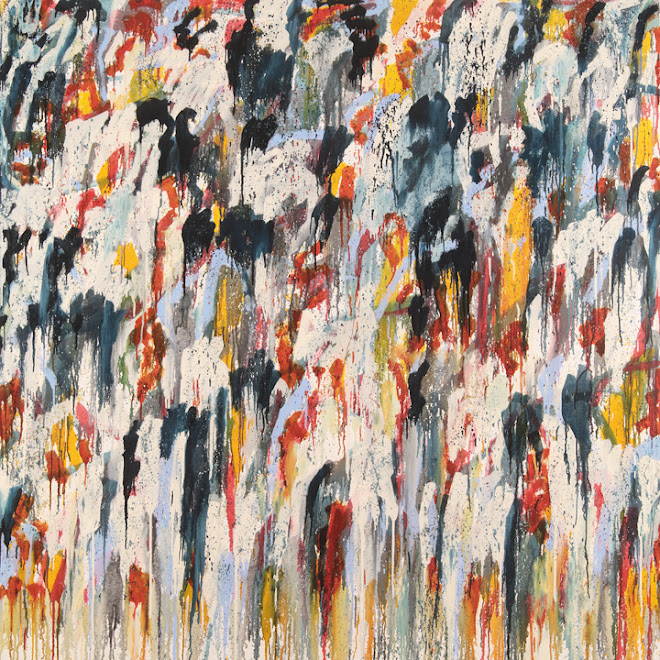 By contrast, in the Algonquin paintings, you’re working with a colour palette referring perhaps to landscape and seasons, but also to an aspect of a shadow in Canadian history.

Usually, when I get a title for a painting or a series it’s not something I thought of beforehand. It emerges from the first painting or two. Looking at the first one in the group the first word that came to mind was “Algonquin.” Why Algonquin? Okay, Tom Thomson, Algonquin Park and so forth. I’ve driven through there, through that beautiful country. And I love Tom Thomson, who doesn’t? But I wondered, does it relate just to that? So I looked the word up. I discovered that much of my childhood was spent on Algonquin territory. Our county place was in the northeast corner of Algonquin territory, which stretches from Western Quebec into Ontario, including the Gatineau, Ottawa and the Parliament Buildings. They’re all on unceded Algonquin territory.

Just as I feel a deep connection to Montreal winters, I feel a deep connection to our summers in the Laurentians, where I spent so much of my childhood. Now, I’m not claiming to be Indigenous, but in some crazy way, something that flows through the land may flow through us all. The ground itself, the stuff that you’re running around in, as a kid, in your bare feet, and that earth comes up through the soles of your feet. And you swim every day in the lake, in that glacial lake. And you’re in that forest. Immersed. Certainly, that’s a part of you. Certainly, that shapes you. Certainly, that makes you.

The colour palette in the Algonquin pieces counterpoints the Winter Poems palette. The colour shifts to a higher key and stretches into a full range of warm and cool pigments, from blues and greens to yellows, oranges, reds, and then an array of new pigments, brown ochre, rust red and iron violet, along with brown pink, strange colours that evoke the earth. 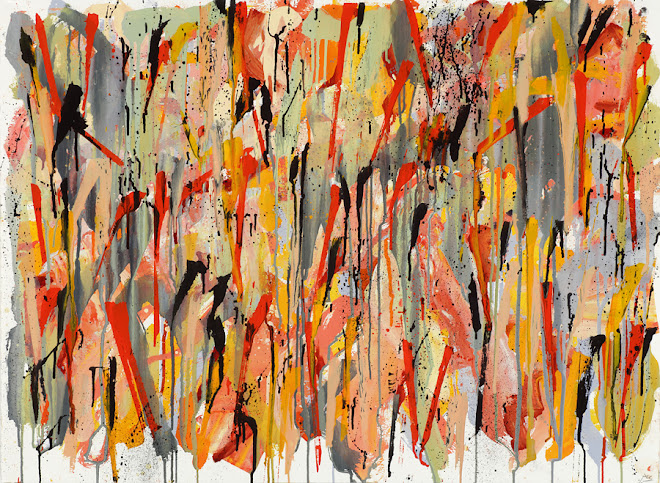 The materials and method in your Stanzas series are a bit different. These aren’t oil on canvas, but oil on paper. It’s a departure in your painting process.

Yes, in the sense that the Stanzas are more informal and smaller in size, but not necessarily in scale. They’re done on Arches oil paper, which comes in 22½ by 30 inch sheets. Paper takes the paint so differently than canvas does. It’s two different painting experiences. I usually have about 10 to 20 of these paper pieces on the go. Paper is so much cheaper than stretched canvas – you don’t worry as much about blowing it. If you screw up, you can cut it up for collage or throw it away, burn it, use it as kindling.

I work on the Stanzas at the end of the painting day using the leftover paint from my paint trays. I hate wasting paint. And if I can’t use all the paint, I pour it into plastic cups. When they skin over I can cut these little circles of paint out and collage them into the pieces. Another element of play comes in, another layer of fun.

I have occasionally tried to get the casualness and informality of the paper pieces into the canvas works, but for some reason it doesn’t work. As someone said about Mozart and Bach, “When the angels are on duty they listen to Bach. When they’re off duty they listen to Mozart.” The Stanzas are sort of off duty.

You’ve mentioned some of your influences. Are there others, perhaps more contemporary?

I think of all artists as contemporary. If I’m looking at them now, they mean something to me now. Two painters very important to me are Joan Mitchell and Pat Steir, both fabulous. I love the work of Louise Bourgeois, Agnes Martin, Julie Mehretu, Sam Gilliam. This list could go on ad infinitum. I’m always looking, always hunting. 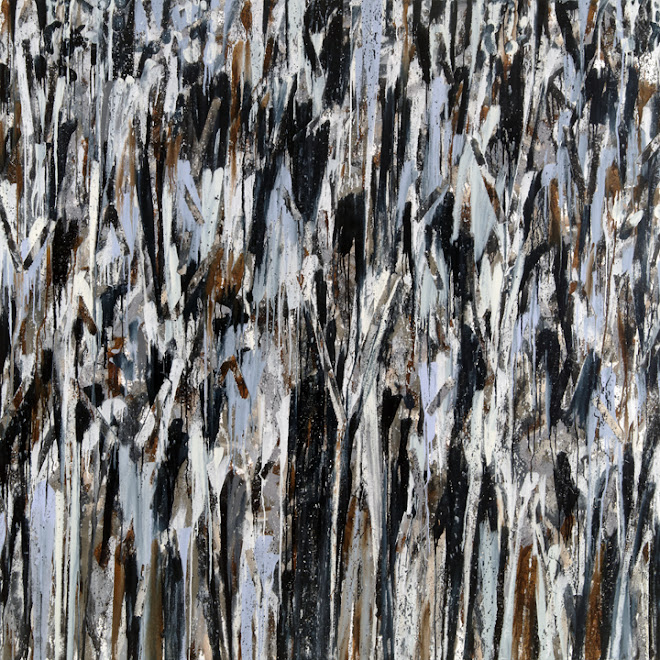 What are you referring to with the title of your show?

I take the title from a comment made by the poet and critic Peter Schjeldahl describing to a friend what looking at art was like: “I think of it like espionage, walking the cat back – why did that happen, and that? – until eventually you come to a point of irreducible mystery.”

Yes, your work is not linear, representative. Why abstraction?

I compare my painting process with ‘tone leading’ in poetry, how one sound in a word will summon a further word with a similar set of vowels and/or consonants, or tones, or rhythm, independent of premeditated conception, thought. And that word arrives into the poem leading to new meaning, discoveries of word combinations that proceed almost of their own volition. I think of [Robert] Duncan’s lovely lines, “bells tied in the foliage / ring as the wind rises.”

And so it’s a similar process in making a painting – the tone of one colour in one place in the field calling for another, either “similar” or a tint or variant thereof, or a counterpoint, a contrast, a violation. And then, in the end, all of these various tones have to be muscled, have to muscle themselves, into a complex array of rimed colours and shapes and gestures to make it into one structured utterance. As if it happened all at once and is still happening.

There is that feeling of spontaneity and improvisation. Your paintings sometimes seem to blow right off the surface, to burst with with physicality, with energy.

I appreciate your perception of the paintings as embodiments of energy. That’s how I think of them. Since I was a student at McGill, I’ve always loved Baudelaire’s statement: “Energy is the highest form of grace.” With luck that’s what I’m doing. Painting and giving energy.