If seeing is believing, then surely two vibrant and dynamic works such as After Rilke III  and After Rilke IV, intensify belief, occurring as they do in the almost operatic space where poetry becomes a palpable presence. They are among the few works by Pierre Coupey that have a literal or suggestive title, serving as a signpost to their destination. It’s not that they veer too closely to the programmatic, or offer a concrete story for the viewer to “read,” if only because they reference one of the most hermetic poets of the last century, but they do offer a tantalizing piece of spiritual bait for those of us who enjoy our mysteries served with a hint of metaphor.

After all, Rilke is the keen-eyed observer who first interpreted the aesthetic purpose and historical importance of Cézanne when he remarked on that great painter’s work that, “Surely all art is the result of one's having been in danger, of having gone through an experience all the way to the end, where no one can go any further.” And like the poet they reference, these two works, along with their companions, take us immediately to the place where they were made: the very edge of pictorial expression, where no one can go any further, as if arriving at a coast where the land itself disappears.

Although Coupey's roots and sources derive from Montreal, his point of origin, his major work has been done in Vancouver and he could be considered a West Coast artist. Upon closer inspection, however, one sees that his work eschews any dualism of east and west, and moves from a "third coast" of the mind. There is after all, no east or west in dreams, and his paintings evoke the retinal charms of a certain optical abandon associated with the unconscious. Finally we can envisage a ticket to that ultimate foreign country which Rosalind Krauss identified as the optical unconscious, and which another poet, Wallace Stevens, evoked so magically in his poem “Of Mere Being,” in which he called upon us to imagine “the palm at the end of the mind beyond the last thought” and to listen carefully to the creatures that dwell there in that distance, singing in the palm a song without human meaning, a foreign song. That is what these paintings are singing, a song without words in a language of free-floating forms. 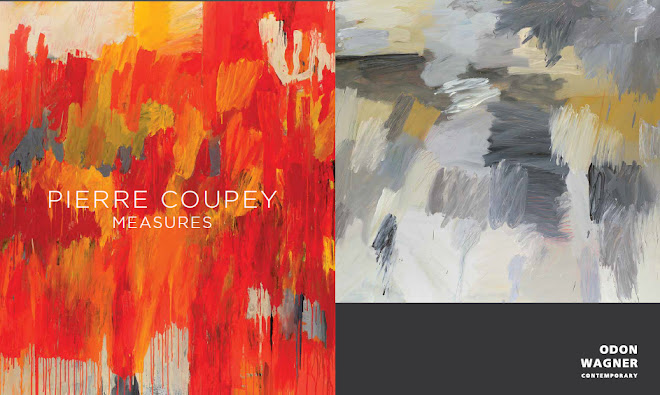 All, or most, of this gifted senior painter’s works are untitled and identified numerically, and with good reason: on the third coast of the mind, and in the palm of the mind that makes such works, language pales by comparison to the outright clarity of declarative statements made by each piece. As the artist himself puts it: “The majority of the works in this show are titled Untitled and numbered –– to put the stress on just the bare facts of the paintings themselves: how they were made, what forces went into their desire to be clearly themselves. To relieve them of words, of these words. To let them be paint.” Letting them be paint is the essence of letting us see what we are seeing, just that and only that.

Yet language still seductively tempts us to approach the works, with its paltry ammunition in hand, as a kind of talisman that refuses to help us grind the images down into literal, or literary, meaning. Instead they playfully unfold in that Rilkean danger zone of extremity while we adjust to their absolute flatness and utter absence of illusion. If anything, they are all about the meaning of meaning itself, not merely about one meaning or another from the menu available to the modernist canon. They are, perhaps, exactly the drastic measures our drastic times require.

And if Coupey is a native representative of that mental and psychological third coast in the mind, he is also exemplary of the classical modernist desire to reclaim for abstraction some of the unique narrative drama more commonly associated with traditional representation, to let shape and colour convey a story all their own. Therefore both gravity and gravitas abound in signal works such as Untitled V, Untitled VI and Untitled VII, as they explore an extremity of emotion that the slightly uptight Cézanne could only dream of attaining. This is not a visual comparison so much as an optical thermometer designed to take the temperature of our temperaments, and if you look long and soft into their glorious flatness you will easily manage to see what jazz looks like, or smell what jasmine sounds like, or taste what hope feels like. Coupey states: “My work doesn’t depict 'the real,’ but re-enacts the real through the proprioception of rimed experience, language, landscape and art. My interest is not in representation, but in presentation.”

This then is the presentation of a painted self in everyday life, with images such as Untitled IV energetically elevating the quotidian in the deft embrace of its fiery furnace. All painting is inherently about time, and the images it manifests are concrete duration writ large. Great paintings are the sediment of the time it takes to conceive, fabricate, share and observe them. Sometimes certain artists receive the gift of time, as it appears Coupey has: he has been presenting for over forty years and (though he may not relish the term) he is a mature, well-seasoned veteran of many fluctuating stylistic regimes, each of which he clearly explores as art history continues to cast shadows across his canvases.

Time has tested him (observe some of his fine works from the early 1970’s for evidence of his obvious survival skills) and time has found him a worthy recipient of its fleeting attention. His work, and the ethos that fuels it, have been decanted over those years, the sediment has been rarefied, and in his newest body of work he has created a distillation of his entire painterly philosophy. That philosophy and its embodied meanings are actively arrayed in the constellation of these serial works. 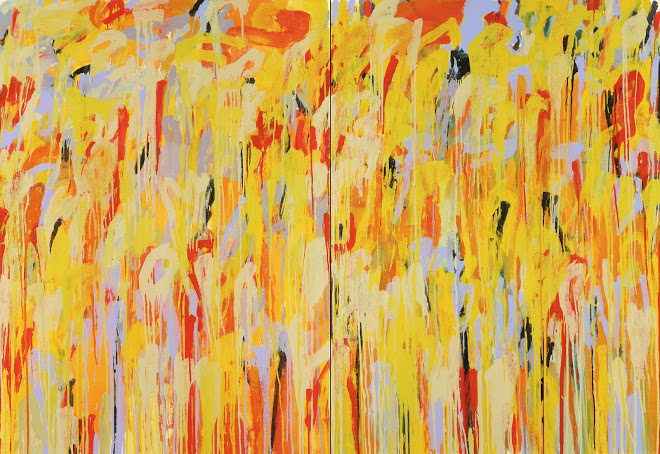 One of the grandest of these embodiments takes place in Untitled VIII, its panoramic format suggesting but not enforcing a delicate landscape trope, as it registers a banquet of delirious reed-like forms parenthetically contained in the curious Botticelli reference, “Primavera”. Spring never sprang with such wild abandon, yet even more shocking is the recognition the viewer will sense by looking at both Coupey’s Primavera at the same time as Botticelli’s 1482 piece. Logic fails to convey how or why his blaze of organic and liquid lights matches so perfectly the 8½ figures splayed across the Renaissance picture in an abstract evocation of ecstatic and photosynthetic growth. Luckily, logic left the building long ago.

This is what the affective, not the cognitive, domain looks and feels like, and the emotions elicited by his brushstrokes melting into drips before freezing into temporary forms…. well, only a Charlie Parker sax solo could convey their boundless joy. Equally magical are the three historically based Tondo works (image 1), referencing the popular Renaissance format of the small circular canvas, which usually presented a charming family or scowling saint’s portrait, but here instead we are treated to the charmed portraits of pure quantum energy parcels flowing forever forward, contained within three lens-like apertures evoking a microscope’s perspective.

Emotion, of course, has always been one of the pillars of abstract expressionism in its formal sense, undiluted by thought and yet so thoughtful at the same time. “In my practice it isn’t reason over passion, or passion over reason, but reason with passion,” is how Coupey expresses his attempt to reconcile what so many others have tried to categorize so exclusively. “Three principles shape my work and each emphasizes the open-ended process of making paintings: development by transformation; form is never more than an extension of content; and the medium is the message.” Not many painters manage the succinct equation he elaborates here: in those three basic principles he encapsulates the entire modernist agenda in a way that makes sense to the uninitiated. Even better, after offering the insight, he lets his paintings perform the perfect auric ritual initiation into the alchemy of paint itself: its power to arouse and subdue us simultaneously.

Of particular note in this suite of new paintings is Untitled II, an exceptional work that seemingly evolved out of the two meditative smaller studies, Study I and Study II, and which somehow creates a calm cacophony of forms jostling for supremacy in the field of vision: there is an invisible landscape here, swept by a storm of possibly quantum origins. Which brings us to the realization that all his images are quantum paintings reaching for that unified field where the immensely small collides with the immensely huge. The result of a surprising marriage between manic surf and conceptual cloud, its offspring is a majestic painting capable of arresting our attention for hours. How to explain the narrow little ledge of orange and ochre in the bottom and the powerful sense of blissful vertigo it induces just by sitting there so naturally? Out of such optical dizziness as this great feelings are born. I gave up asking why certain miracles occur long ago, perhaps noticing that the miraculous is the enemy of how and why. Miracles like these paintings only concern themselves with where and when, which is always here and now.


Donald Brackett is a Vancouver-based art critic and curator.