When I think about the work of Pierre Coupey in the 40th Anniversary issue my focus shifts to how I relate the body politic to the body personal. Action and reaction are processes that release spark and memory when I am working in my studio so this is where I’d like to begin. I enter the studio as a painter to begin exploring the painting process; this may or may not bring forth insights into Pierre Coupey’s process. I start by making small one foot square abstract works. I measure out a boundary in tape on the wall to match the dimensions of his paintings. Getting a physical relationship to the size of his work I start to mix my paint. Colours appear, mark making happens, layers start to layer up, medium begins to drip, but then it all collapses in on itself. These marks become my own, splotches and drips are turned into a rhythmic writing; abstract characters become defined by my brush work. As ethereal and physical, politic and personal, begin to merge I seek out time and history for perspective in the present.

To begin with I would like to introduce my background and my own intentions as an artist. I am Anishinabe Kwe (Ojibway woman). As a political stance I use this to distinguish myself from the mainstream culture. My identity is fundamentally political. Creating, writing, researching, painting, assembling objects, performing as a First Nations person is to link my body and process with my ancestry. My DNA contains links to my history. My visibility is a declaration of survival. The connections to my birth place remain deep within my body. At a cellular level my body remembers this place. Tug at the chord and time collapses, the throat constricts, the hollow within turns hot and trembles. The conflicted state of mind and desire to inhabit this memory is what I carry like a warm nest with fragile eggs crushed within a pocket.

How memory and perception of history is stored within the body is a concept that I have focused on within my own work. How does one begin to heal from the trauma of history? Through creativity the viewing or witnessing of art can open new spaces to create a voice in which to speak from the margins. Idealistic as this sounds; belief can be powerful. At the core of this healing is memory and emotion. How to bring it about through creative expression; whether it be through painting, performance, installation or with words, is the challenge at hand. 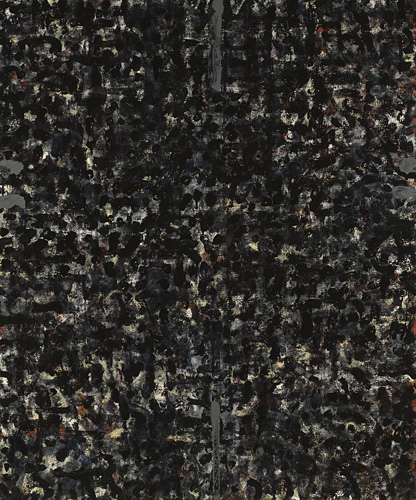 When first looking at Pierre Coupey’s work I felt comfort and warmth. His greys, blacks and browns are applied in such a manner they seemed fuzzy and familiar yet there is something there between the layers, an intangible emotion, just out of reach. Being openly cumbersome I describe his mark making as a series of organic blotches. There is softness and malleability on the surface of his work. A kind of buttery skin that makes me think of eating with my hands and licking the fingertips. A kind of grid structure appears that is in the process of dissolving into its layers. At the top and bottom of the frame a pair of lines are visible; signifying a connection or an unknown question of the viewer. The lines act as a kind of visual compass defining the surface and the depths of the picture plane. The next impression of these lines are that they indicate a pair of appendages. They become cut-off at the top and bottom of the frame in a sort of dismemberment.

You have to pardon me some of my description of the medium of paint when referring to Coupey’s surfaces as being buttery and of eating and so forth, especially with regards to my last observation. I think these kind of associations punctuate how his paintings highlight the human presence. Thinking about Coupey’s work, my perspective melds with my tactile experience of paint and my re-creations in the studio. The sensuous beauty of the medium resounds. I begin thinking of his use of ‘illumination.” I begin physically to appreciate what “Illumination” or Komyo is within my own actions as a painter. I begin to feel the rhythm in his saturations of black, his earth tones upon fields of orange and red within the work Komyo VIII. Highlighting sparks of red brilliance pierce through the surface. Demonstrating Komyo’s illumination of light –– a Zen Buddhist state of being that resides outside the power structures and the violent forces. Rhythms of organic splotches and blotches possess an inner energy and life force in the process of formation and re-definition. Within this energy it’s the small spaces that spark the recognition within a viewer’s experience. He explains that the Komyo Series can “embody a call for meditation, for peace, for something other than violence, perhaps, even, for something as extreme as 'beauty'.”

Meditation on the history of violence within Coupey’s work see the role of the viewer as bearing witness to historical geo-political violence as a pivotal counter balance. As said witness, the viewer becomes more aware of war crimes incited by the USA in their “war on terror” as a central theme behind the work. Coupey’s paintings read as historical markers of crimes committed, civilian casualties and the exile of peoples. Its other underlying concept being the act of meditation itself; his images beckoning a resolution to conflict.

Violence in Iraq and Afghanistan is brought to the surface of his work; ready to burst from its borders. Within this the viewer’s relationship to the canvas surface cannot be ignored. As Coupey sees it “Komyo,” is an autonomous action that works outside the greater power structures to present beauty as being capable of opposing the darkest of violent histories. Seeping through the surface Komyo acts subliminally to reveal and illuminate. Komyo III is at its core a repetition of black marks that define and conceal the overall structure and meaning of the work coupled with a thick multi layered approach to pigment allowing small patches of light to prick the surface thereby bringing into being an ‘illumination.’ The “Komyo” series skillfully conveys the geo-political violence to the viewer, submerging him or her in an intense mixture of emotions while allowing rays of transcendence to open spaces for renewal and radical “beauty.” In his work Coupey defies the power structure: breaking it apart and reconfiguring its abstractions into organic markings that take on patterns of their own - commanding and releasing knowledge at a cellular level of being.

Charlene Vickers is an Anishinabe artist born in Kenora, Ontario and currently based in Vancouver, BC where her crossdisciplinary works explore her experiences living and working in urban spaces. She graduated from the Emily Carr University of Art and Design in 1994 and is currently an MFA candidate at Simon Fraser University. She received the 2018 VIVA Award from the Jack and Doris Shadbolt Foundation for the Visual Arts.

These reflections first appeared on The Capilano Review website.