Pierre Coupey: Beyond the Borders

Over the course of more than five decades as a non-representational painter Pierre Coupey has deliberately avoided settling into a signature style. His pursuit is the presentation of a material and its range of application. An explorer’s zeal for discovery is only half the explanation. The other is his distrust of ease and technical facility. Valuing intuition as an indispensable aspect of the way he paints, once Coupey feels too comfortable, once intuition threatens to become habit, he moves away in another direction. He wants to be off balance, convinced that you have to work in a way that invites the unexpected to discover the unexpected. In Coupey’s solo on view at Odon Wagner Gallery in Toronto through November 4, the paintings’ surfaces have been subjected to a relentless and methodical accumulation of strokes. They are lush and wet, the paint’s viscous materiality so thinned that it runs down in rivulets creating a gravitational flow, making the paintings look as if they could slide right off their supports. And yet they have a geometry and tension that holds them in place. 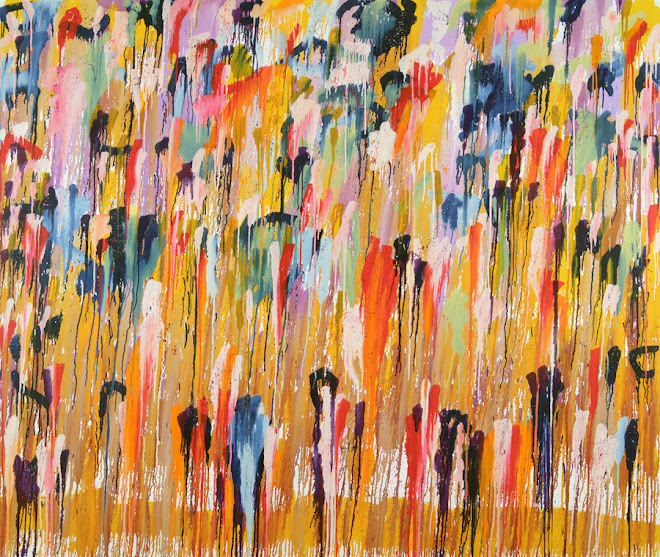 The Untitled paintings are composed by the steady accumulation of individual, parallel marks. Their direction is vertical and downward. Against the vertical is the horizontal placement of stroke next to stroke. Though they vary in length, the tops of the strokes are often aligned in approximately horizontal rows across the canvas’s width. Sometimes it’s a single stroke of color, other times a buildup of several together to make wider patches. This varies the surface between dappled and block-like. The marks are layered at times, but the paint is thin enough that what is below is never obscured. This should create the illusion of greater recession below the surface as should the optical play of cool colors receding and warm colors advancing. But the drips (traces of process rather than being expressive and emotive) keep the surface emphatic.

Rarely do the strokes continue to the bottom of the canvases. This area is reserved for the runoff from the painting that’s gone on above. Discernible beneath the vertical strokes are long, broad horizontal strokes that must be the first that Coupey puts down on the canvas. They are like foundational marks that are gradually, but never completely covered over. Because of their visibility and separation from the clusters of strokes above, the horizontal reads as more of a traditional horizon line that would divide illusionistic space. 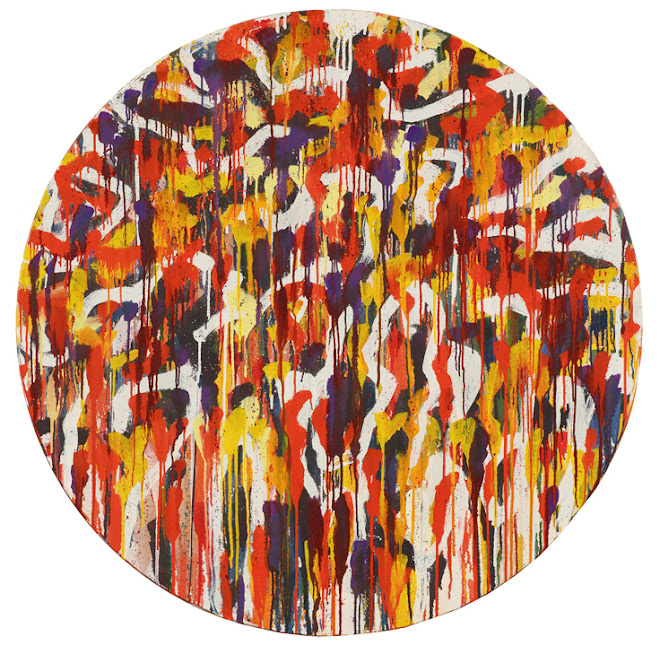 The Achilles’ Shields paintings stand out for the obvious reason that they are round. They draw attention to how much the strokes of the Untitled paintings repeat the shape of their supports and how a change in the shape of the support changes a painting’s tension. When the shape of the strokes, their arrangement, and the shape of the support reinforce one another it creates a stability that can be felt in the body as well as seen. The effect of the Shields’ round edges combined with the verticality of the strokes, and especially the drips, is to create a tense balance between compressive and centrifugal forces. These circles feel denser and heavier than their rectangular cousins. Compared to how gently the rectangles lay against the wall, the Shields really bang holes in it. 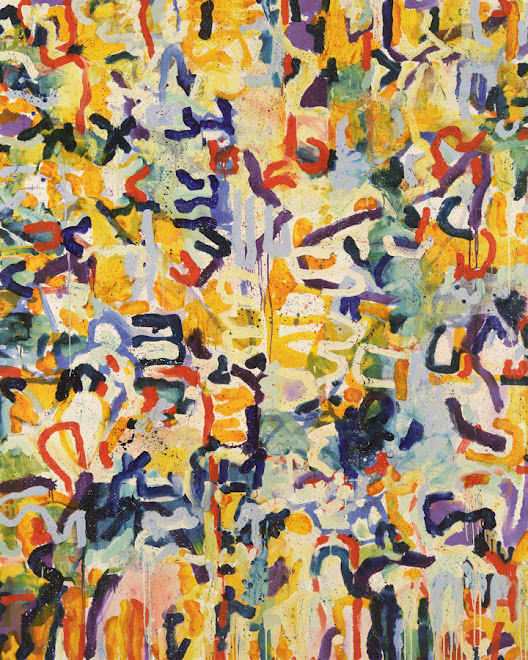 Rock Pool I, Rock Pool II, Rock Pool III and Lac-en-Coeur represent Coupey’s most recent developments. The strokes have evolved into a freer arrangement of irregular shapes and blotches. In this way they are closer to the Achilles’ Shields, but their surfaces are less densely covered. Lac-en-Coeur diverges from the Pools by combining a rectangular field with a circle’s focus by breaking a cardinal rule of composition not to make the center of the canvas a focal point of interest. Yet Coupey has playfully left this central point of interest rather empty. Lac-en-Coeur draws attention to its center by what’s not there, turning the usual relationship of periphery and center on its head in a way reminiscent of Robert Smithson. The centrifugal feel of Lac en Coeur is partially explained by Coupey having painted it with the canvas laid flat on the floor so that he could circle around it, painting from all directions. Hung on the wall the effect is like looking up at a domed ceiling. 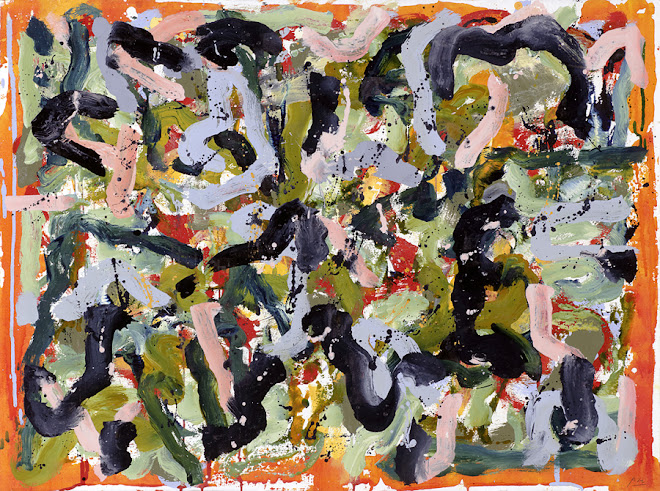 Like the canvases, the Stanzas (painted on paper) are predominantly painted in an all-over style, but they are more varied in the techniques employed: brushed and blotted, dripped and sprayed, scraped and collaged. Two stand out as particularly interesting: for their foreshadowing of Lac en Coeur’s central focus in a rectangular format; the contradiction between surface treatment (all-over) and composition (a center of focus at the center of the surface); their reflection of the tension between center and periphery; and their usefulness in illustrating the conceptual and procedural underpinnings of all the Stanzas. Stanza XVII has a blueish daub smack in its middle to which the eye repeatedly returns for rest. It is a final exclamatory point, the pupil of an orange-rimmed eye. Stanza XX has a similar centrally placed mark, in this case a circular, blue ring. 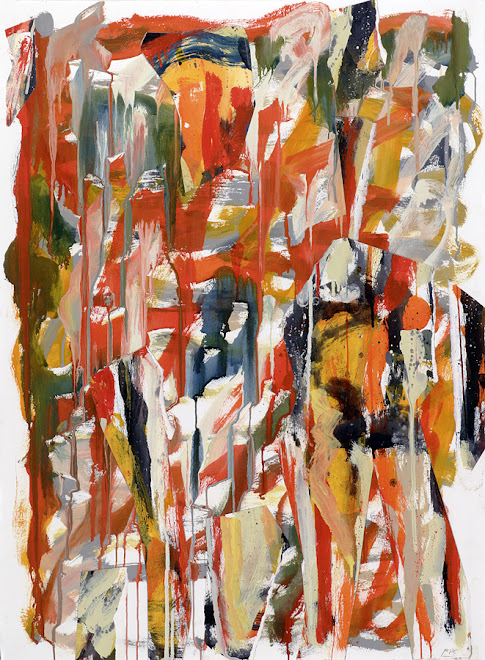 Compared to what goes on in the center, what happens on the periphery is usually considered secondary or ignored altogether. Lac-en-Coeur is a major statement of Coupey’s painterly rebuke. The Stanzas go a step further to declare that the periphery can not only overshadow the center, but that a painting’s interest can be found even beyond its borders. Coupey recognizes that his paintings on canvas extend beyond the borders of their supports, not just as a metaphor, but literally. He acknowledges that the completion of a gesture –– the last delicate drips and spray of larger marks made from the energy that travels from the sweep of his arm, or the flick of his wrist, through the brush, to the paint that leaves it –– sometimes ends outside the painting, on the wall or floor. Examine the wall against which a painter paints, and chances are you’ll find a rectangular blank area (ordinarily occupied by a canvas) surrounded by splatters of color, and the floor below covered in drips. Coupey values these “lost paintings” as he does the entirety of the gestures that create them. The Stanzas are quite literally companion pieces to the paintings on canvas. They begin as sheets of paper either hung next to the canvases as they are being painted, or laying flat on the floor below. As a consequence some of their marks are made by chance, from overspray and dripping. Other marks are intentional, painted with the leftover paint from whatever canvas is being worked on. The result of this procedure is that the Stanzas wring every ounce out of Coupey’s paints and gestures. Once this stage of the process is complete Coupey goes back in with whatever additions and modifications are necessary until the Stanza is complete.

Coupey’s search for what paint can do, or what he can do with paint, isn’t the whole point of why he paints; neither is it to reveal what he’s discovered through exhibiting. Imbued with a righteous indignation and the conviction that art at its best stands against violence as a defiant response to the outrages of barbarism committed against civilization, Coupey is propelled by an aesthetic of resistance. Bearing witness by recording brutality is one side of maintaining one’s humanity and standing against violence. On the other side is creating beauty. Both are principled responses that stress art as having a moral component, artists as having personal responsibility, and what used to be called humanism.

Dion Kliner is a Vancouver-based sculptor whose most recent exhibition took place at the Burrard Art Foundation in Vancouver in 2016. As an arts writer he has published more than forty reviews and catalog essays. He was awarded an Adolph and Esther Gottlieb Foundation Grant in 2014.

This article first appeared in Two Coats of Paint, October 12, 2017.