Pierre Coupey’s painting progress over the last year has been extraordinary. Each new work has presented a new set of problems derived from the fact of having completed the previous painting. Then the cycle starts all over again. But for the viewer, especially a regular and interested one, it is breathtaking to observe how clues and implications, strengths and successes are pounced upon, turned around, upended or thrown into a risky new context. This is real growth –– intelligent development and, in fact, the very essence of the business of painting. Painting to Pierre Coupey is total involvement. When he is immersed in the act, little else seems to matter. For a gregarious man he becomes a hermit. For a worldly, realistic and unpretentious person he becomes eccentric, vaguely cranky, and totally somewhere else.

I don’t want to make a highly analytical statement here, but I do want to record my admiration and support for someone who puts so much passion, energy and commitment into painting. Coupey does not expect, ever, to get anything back for his efforts. The creative outpouring is crucial and almost the complete reward in itself. But the audience will be there and there will be recognition, ultimately, for the quality and power of this work. 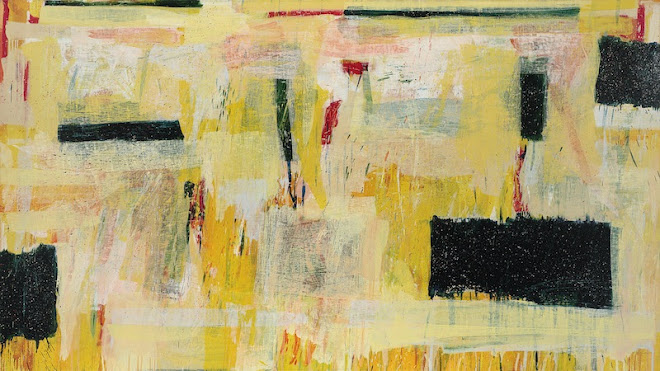 My confidence in Coupey’s work is based upon the fact that aligned with this creative energy and passion is a deep sense of control. A thoughtfulness and well paced ability tom put the next brush stroke in just the right place, to leave alone the striated and scored expanse of paint which acts as space or interval between the structural essence of the painting. There is an unerring ability to build, span, link and stack a range of forms which are like the girders, posts, beams, block and scaffolding which are present in great architecture and sculpture. In painting I think of Franz Kline, Robert Motherwell, Matisse and Rembrandt as artists who have that same innate sense of the importance of structure.

There is a feeling evoked by Coupey’s newest paintings which makes me think of ancient monuments or sires, an overview of something like Aztec ruins, Stonehenge, or maybe abandoned Indian villages on the Charlottes. Sites which are constantly obliterated or washed over with undergrowth, earth, sand or water, only to be revealed again by wind, erosion, or the processes of time. Coupey’s paintings have this sense of well planned underpinning. The paint then goes on and off in washes, spatula scrapes, brush strokes and knife marks. This activity on the surface never removes the underlying presence, only re-asserts it or revitalizes its relevance and function. And so it is with his entire body of work and his continuing activity as a painter –– statement, thought, action and a repeat of the cycle. It seems unlikely to end, but it is good to see this particular and current revelation.

Alan Wood (1934-2017) was a leading Canadian artist who lived and worked in Vancouver. Since 1962 he exhibited nationally and internationally, in group and solo exhibitions in Great Britain, Europe, Canada, the United States and Australia. His work is held in major private, corporate and public collections in Canada and abroad. His estate is represented by the Winsor Gallery in Vancouver.