Pierre Coupey’s paintings on canvas and paper are presented in two concurrent exhibitions sharing the title, Pierre Coupey: Cutting out the Tongue, Selected Work 1976-2012, at the Art Gallery at Evergreen and at the West Vancouver Museum. Both institutions have a history of presenting survey exhibitions of established British Columbian artists who have a dedication to the evolution of their unique practice, and who have influenced the culture and history of the region.

Like the parts of a diptych or the facing pages of an open book (both forms adeptly employed by Coupey in communicating his poetic voice), these two exhibits are at once distinct in scale and content, and inextricably linked: each includes works from series Coupey has created over three decades, which, taken together, form a representative survey. 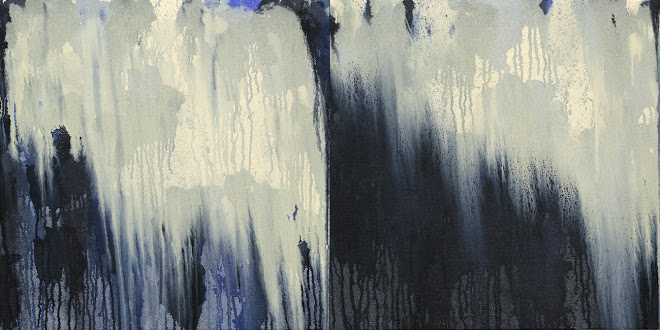 Coupey’s practice of working in non-linear series, which he refers to as “clusters,” create works that act as memes, transferring cultural knowledge across time and place. His paintings are imbued with art historical and historical references and deeply situated within the specific context of his past and present surroundings, political inclinations, and links with literature and poetry. Although reliant on personal and broader historical contexts, the exhibitions choose not to look back in linear fashion, but to recognize the ebbs and flows of Coupey’s clusters.

The title of the exhibition is derived from a statement made by Henri Matisse in conversation with American painter George L.K. Morris, who encountered the artist while on a train in Europe in 1931, and later wrote about it for Life magazine. [i]  In response to an argument Morris was making about teaching and learning about art, Matisse first exclaimed, “What is there to say about art!,” and then commented, “All artists should have their tongues cut out—then they’d have more time for work.”

What is there to write about art? As curators, we are tasked to contextualize art through words – to seek precedents and to situate work within contemporary discourse. To do so with Coupey’s work presents a challenge. His literary accomplishments, associations, and extensive knowledge of art, language, poetry, and Japanese culture permeate his work, and there is no easy distillation of this complex mix. Instead, the paintings “speak” both directly and indirectly to the viewer through the artist’s use of paint, colour, texture, scale, symbols, text fragments, and calligraphic marks. He gives further resonance to his works through their titles, which reference other poets, places, and events of personal significance.

Writer and poet Lary Timewell Bremner’s catalogue essay, Cutting out the Tongue: The Ontology of Silence, deepens our understanding of Coupey’s work on multiple levels. In particular, he speaks of the looseness of time – the deep connectedness we share through the arts, conversations with the dead, and connections with all eras – that flows through Coupey’s work. Bremner also gives viewers rare insight into Coupey’s creative process: his layering of paint, of history and art history, his poetic references, the co-mingling of his artistic and literary gifts.

In writing about Coupey’s series Komyo I-X (2002-2008), Bremner discusses this cluster in relation to Coupey’s ongoing interest in the expressive Zen Buddhist calligraphy of the Kamakura period. Bremner draws associations between the terms Komyo and illumination, and senses that “the illumination here is everything from the light behind the eyes in meditation… to the original firelight flickering off the walls of the caves of Lascaux.” Though not prescribed, there is a correlation between Coupey’s practice and our reading of his work, resulting in a kind of enlightenment.

For over forty years Coupey has explored a “nexus of emotional, conceptual, aesthetic and technical challenges” in his paintings. By making connections between individual works created at different points in time, he further investigates particular tangents or angles “kicked up by the direction of the overall group.” [ii]  In this way Coupey’s cumulative experiences are made manifest though his manipulation of colour, light, and gesture, and communicated to the viewer through emotive pathways that are cross-cultural, universal, and timeless.

Foreword to the catalogue for the survey show, Pierre Coupey / Cutting Out the Tongue: Selected Work 1976-2012 (West Vancouver Museum / Art Gallery at Evergreen, 2013).