Pierre Coupey: Between Memory and Perception

Pierre Coupey is equally devoted to painting and to poetry, and each discipline was entwined in his exhibition “Between Memory and Perception.” Words, both actual and implied, often appeared, and since a number of the works were structured with multiple elements—including diptych, triptych, a four-panel piece—it was tempting to view them as pages or phrases. However, despite the metaphor of page or phrase, the consistent irony in Coupey’s work is that the language is paint and the work is abstract.

Coupey’s palette and visual dynamics draw viewers at a distance. For instance, three works grouped together for this show refer to Isola San Michele Cemetery in Venice where he sought out the graves of Ezra Pound and Igor Stravinsky. Each painting is sprinkled with crosses in quick strokes that allude to a spectrum beginning with the essentials of language—the alphabet, letters T and X—and ending with the mark of an absence, or a grave. Some crosses are also clearly bone-like, a result of Coupey drawing his finger through the paint. In two works, dense lines of cursive flow laterally from top to bottom, as if begun before the painting and ending after it. The cursives allude to writing, text, voice and a subtext of many voices combined. 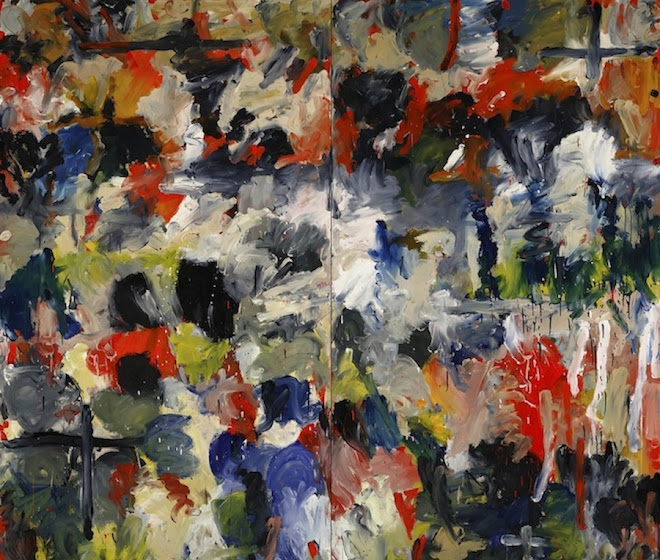 All the work in this exhibition alludes to the poem—as language, as song, as homage to creators such as Pound, Stravinsky and Garcia Lorca. Riverbank II - For RB is a diptych. Vibrant colours seem to float at a distance, like autumn leaves on water. In this work, two prominent crosses, one lower, one higher, draw the eye upward through many points of balance and tumble in Coupey’s colours. The brevity of life is alluded to, along with the ephemerality of seasons. Coupey’s dedication to Robin Blaser, the noted BC poet and teacher who died in 2009, memorializes Blaser’s spirit and creative influence. The result was an exhibition that moved through engagements with the present, the past and memory.

Robert Sherrin is a writer, visual artist, and educator based in Vancouver. He is a past Editor of The Capilano Review, and teaches in the English Department at Capilano University.