Abstract Works Evoke the Poetry of Memories
New paintings from Pierre Coupey were inspired by literature, and a visit to Italian cemeteries

Two years ago, artist and poet Pierre Coupey set off on an extended trip to Italy. Before he left, a fellow poet asked him for a favour. Duncan McNaughton asked Coupey to go to the Protestant cemetery in Rome and place a pebble on the graves of John Keats and Percy Bysshe Shelley. Even though neither Coupey, McNaughton nor the two dead poets were Jewish, he felt that it was a lovely tradition in that faith to follow, and was honoured to do it.

Venice was also on Coupey's itinerary for that trip, so McNaughton asked him to do the same on the graves of poet Ezra Pound and composer Igor Stravinsky at the Isola di San Michele, that city's historic cemetery island.

It was a beautiful day in Rome when he arrived at the cemetery, where not only Protestants are buried but also Jews, Muslims and other non-Catholics. As feral cats lounged around the well-tended graves, Coupey had no trouble finding the spot where the two Romantic poets were buried.

In Venice, it was a different story. Coupey had a much more difficult time finding the graves amid overgrown vegetation and overturned tombstones.

Back in Vancouver and looking back on the trip, Coupey thought of the connections between memory and poetry, and how those concepts could be translated visually.

Coupey chose to use building blocks of colour and shape to build paintings that reflect their genesis in poetry and literary allusions. A suite of his paintings inspired by his trip to Italy plus others are among those in an exhibition called Between Memory and Perception at Gallery Jones in Vancouver.

As a medium, painting lends itself well to making art about memory. To lay down a memory, the mind takes a real-life event, processes it into an inner experience, and then records it, often ambiguously. Similarly, painting is a process that takes time and involves layer upon layer of application.

In the painting Isola San Michele IV, for example, the first layers of meaning are strong black pictographic-like shapes placed to recall numbers on the face of a clock. On a layer underneath are scribbled, horizontal lines of illegible words and letters covering the surface in rows. 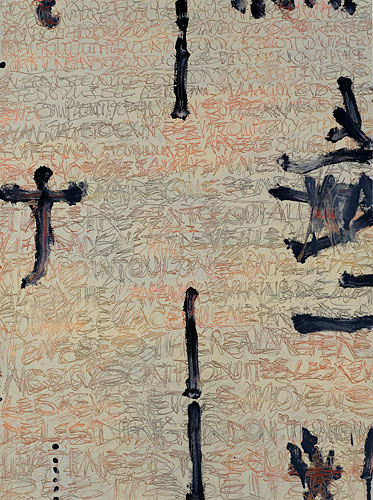 The obsessive, dreamlike writing has been created by scraping away paint to reveal another surface beneath greens and oranges. Like memories, the different layers of paint lie on top of one another: Sometimes they obscure and sometimes they reveal what lies underneath.

In the front window of the gallery is Lorca's Bones I (for RB), a painting inspired by poetry but from a different source than Coupey's trip to Italy. Unlike several of the other works, it's a much more sombre painting of black shapes that suggest both blood dripping and fragments of an undeciphered language.

The Lorca of the title refers to Federico Garcia Lorca, the great Spanish poet and dramatist who was "disappeared" by the Nationalists at the start of the Spanish Civil War in 1936. Last year, Lorca was in the news when a team hoped to find his remains in what was believed to be his burial site. The RB refers to Robin Blaser, the great poet who emigrated north to Vancouver in 1966. Blaser, who was part of the Berkeley Renaissance in California along with poets Robert Duncan and Jack Spicer, died last year. Coupey was one of Blaser's pallbearers.

Many of Coupey's paintings are full of colour with surfaces that vibrate with macro-and micro-diversity.

Kevin Griffin writes on culture and art for The Vancouver Sun, covering local, national and international exhibitions, events and issues in the cultural world.