Pierre Coupey’s paintings in Counterpoint embody two themes: conflict and resolution, or, more specifically, the contrast between acts of war and acts of peace. In the series of paintings on paper there is a palpable density to the images provoked by the “war on terror” and the conflicts in the Middle East. Bearing witness to these events is a central part of this series and Coupey doesn’t flinch from conveying feelings of chaos and dread. His paintings address difficult subjects yet they remain formally beautiful, with an understated and resonant balance. 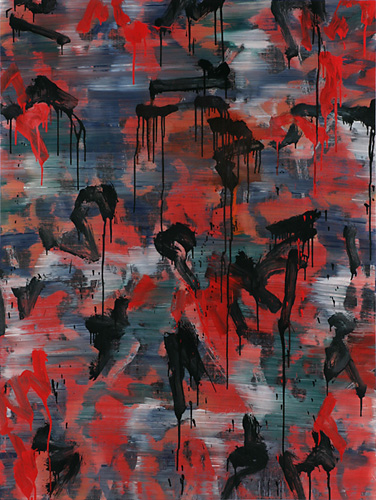 In counterpoint to the war images in the works on paper are the Komyo paintings. The Komyo images share the same elemental physicality the war paintings possess, but now with a more contemplative remove. Sensuality and corporeal pleasure pervade these canvases. In some, the densely layered colours combine to imply a compacted space; the translucent glazes evoke time and physical dimension in which the rendered space is atmospheric; in others, the agitated gestures combine to make a denser surface, skin like, a camouflage of sorts. These images conjure the hides of beasts, predators and prey. They are animalistic, almost Paleolithic in their tactility.

In these works Coupey explores vision, considered by Aristotle to be our most rational sense, in relation to balance and touch, primary animal/body senses. There is a tremendous variability in his tactile gestures: some marks are slow and ponderous, they echo the awkwardness we sometimes feel in our bodies; others are quick and rapier like, delicate and fleeting and accurate. Always there is an overall interrelationship and unity in the multiplicities of gesture.

The physical presence of Coupey’s paintings is striking. The largest canvases have a robust physicality that informs the entire series. While the large works on canvas have a gloss surface, the paintings on paper have a soft, barely reflective surface: both give a sense of integration between the observer and the observed. The viewer is invited to enter these rendered spaces, to take part in the activity of the painting.

A fundamental fact of Coupey’s practice is his focus on the language of abstraction. He is resolutely committed to an inquiry and understanding of experience — of form and space — through the process of painting. As artist and theorist Ian Wallace points out, “Abstract art has always had an ambivalent relation to what can be said about it. Interpretation is simultaneously demanded and refused.” Coupey’s abstractions refuse reductive interpretation. Rather, they present us with the urgency of felt experience, and require that we respond with our own personal sense of engagement and feeling.

Marcus Bowcott is an artist, sculptor and printmaker who taught in the Studio Art Program at Capilano University. He shows widely in private and public galleries in Vancouver, Toronto, and Seattle. He has created major sculptural installations in Vancouver and Munich. His work is held in numerous private, corporate and public collections, including the Canada Council Art Bank and the Vancouver Art Gallery.