Tangle: The Paintings of Pierre Coupey

Pierre Coupey’s artistic practice draws from a number of disciplines. As a painter, poet, printmaker, editor and educator he has been influenced by and been influential in fostering Vancouver’s tradition of creation through interdisciplinary practice. Forerunners and contemporaries such as Roy Kiyooka, bill bissett and Al Neil further exemplify this method of artistic practice in Vancouver’s cultural history. [1]

As a multi-disciplinary artist, Coupey’s latest group of works emerges from a lifetime of experience and interdisciplinary art making. The interplay of the formal language of painting with associations summoned from fiction, poetry, and poetics first emerged in a series of image/text works titled The Journal Drawing Series, the series of paintings on paper A Book of Days I-XII, the series of paintings titled Variations done for bpNichol, the prints in the Collagraph Series, the Requiem Notations series of etchings, and finally the paintings in the Notations Series. To varying degrees text has been associated and integrated in all of these projects. As with many painters working in the field of abstraction, the pressures of landscapes and weather constitute another strand that Coupey also interweaves with the formal concerns of abstraction and the imperatives of poetics. This was one of his primary concerns in the paintings that make up The Notations Series, the body of work that immediately precedes the works in this exhibition, Tangle.

The large ink drawings from the series On the Rainy River I-XX move from the work in The Notations Series in several ways. First and most obvious is the continuing reference to west coast weather and light, places with water, and the muted tones of grey often experienced throughout the year. The ink and brushwork, however, evolve from Coupey’s investigation into the calligraphy of the Kamakura period in Japan. [2] These two strands of examination become entangled with a third: a particular passage in Tim O’Brian’s story “On the Rainy River,” a moment in which the narrator must choose between exile and war, a moment in which he hallucinates an uprising of his past, present and future. [3] In these pieces, Coupey suggests an extended rhyme between a state of crisis, a kind of text and an imaginary place. 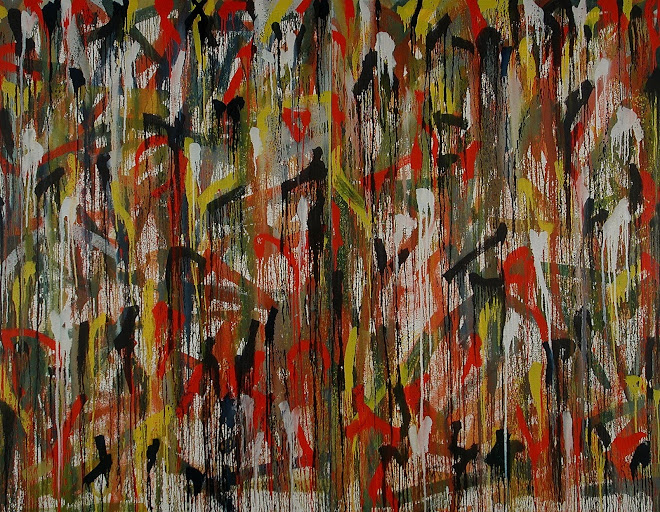 Rhyme is an integral and intense component in the Tangle group of paintings. If the ink drawings propose a horizontal trisection of the picture plane, the paintings of Tangle propose a vertical bisection of the surface. This division works either as a literal lineal separation between the two panels of a diptych, or as an inscribed separation between two halves of a fictive diptych, and the rhyme here is primarily with the pages of an opened book, a format Coupey has been using since 1980-1981. [4] A painting, for Coupey then, can be in itself a book—opened at a specific place in a text, two pages made visible, across which reads a painted text, continuously or discontinuously, legibly or illegibly.

The large diptychs Tangle (for JM) and One More Once (for JPR) reference two early and major influences in Coupey’s work: the painters Joan Mitchell and Jean-Paul Riopelle. The paintings are a paired homage to the two artists who themselves were paired in a relationship of their own as painters and partners, and reference the untidy, chaotic entanglements painters and artists often experience. Further rhymes between order and disorder are investigated in the works Quarry, Persona, Rider, Thicket, Archer and Grove (III). In these paintings Coupey develops an intensified palette that departs radically from the colour work in the Notations Series, and structures the brushwork according to the system developed in the ink drawings and an early work, Painting the Lion from a Claw (1976).

Coupey is in the process of organizing the work in this series according to the letters of the alphabet, an ABC of titles, as each painting at some point in the process of its making must “speak” its name and then take its alphabetical place. For Coupey, this process parallels the structure of Gilbert Sorrentino’s text, Splendide-Hôtel, and the epigraph he takes from Rimbaud: “Et le Splendide-Hôtel fut bâti dans le chaos de glace et de nuit de pôle” (The splendid hotel was built in a chaos of ice and polar night) [5] —an image which evokes the origin of language, the critical pressures it comes from, and the origin of imagination itself. Language and imagination, Coupey argues, written or painted or both, is the structure we dwell in, with all its order and disorder. [6]

1. Roy Kiyooka’s practice included poetry, sculpture, painting and photography. bill bissett experiments with poetry, sound poetry, concrete poetry and painting. Al Neil’s interdisciplinary practice involves sculpture, assemblage, collage, writing and music.
2. During a visit to Kyoto in 1998 Coupey discovered the calligraphy of the Kamakura period in several small galleries off the main streets of Kyoto. In 2003 Coupey revisited Japan to see major museum shows of Kamakura period art in Kyoto and Nara.
3. O’Brian, Tim. The Things They Carried. New York: Broadway, 1999.
4. Works from this period that explore the diptych format include Wedge and Homage to Li Po, in which a vertical pencil line bisects the surface. The diptych format etchings in the Requiem Notations Series explore this concept intensely.
5. Sorrentino, Gilbert. Splendide-Hôtel. Chicago: Dalkey Archive, 1984.
6. This quotation and referential information come from an interview with the artist in his studio on October 18, 2005 and through text provided by the artist on his work and practice.

Darrin Martens is a former Director/Curator of the Burnaby Art Gallery. He is currently the Gail and Stephen A. Jarislowsky Chief Curator at the Audain Art Museum in Whistler, BC.