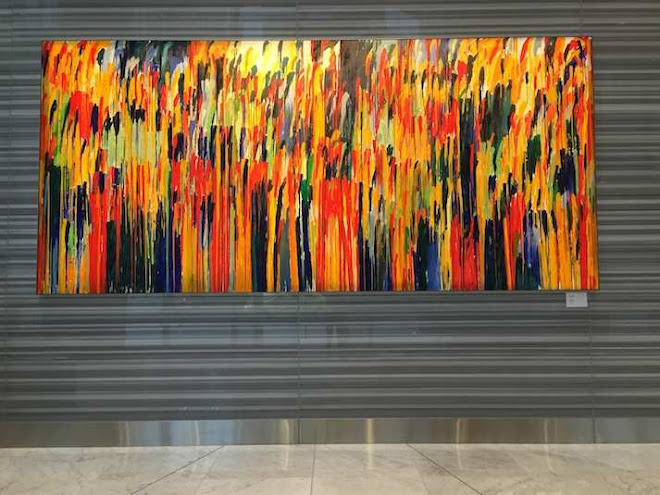 When I think of public art, I usually think of a sculpture outdoors. I don’t think of a painting on canvas. But because of the design of the ground floor of a new office building downtown, a painting in the lobby has become a kind of public art.

The painting is in the brightly lit lobby of the new office tower at the northwest corner of Alberni and Thurlow. The building doesn’t have a name other than 745 Thurlow. Designed by Musson Cattell Mackey, it’s the building with the corporate sign SNC-Lavalin at the top on the outside. Although the office tower and its green glass isn’t one of my favorite new buildings in downtown Vancouver, I really like the building’s open and transparent relationship to the sidewalk and street. Due to the shallow depth of the lobby, the painting is easily visible to anyone walking or driving by. Plus, there’s a generously covered outdoor area – it’s too small to call a plaza – where you can stand and be sheltered from rain and look at the painting without going into the lobby.

Inside, the vertical forms of the colourful oil painting contrast with the horizontal lines in the grey marble of the lobby wall.

Already, people are popularizing the painting by taking selfies in front of it. The security guards have also given it the thumbs up. One I talked to now uses the painting as a geographic marker and tells people: “We’re in the building with the bright yellow painting in the lobby.” 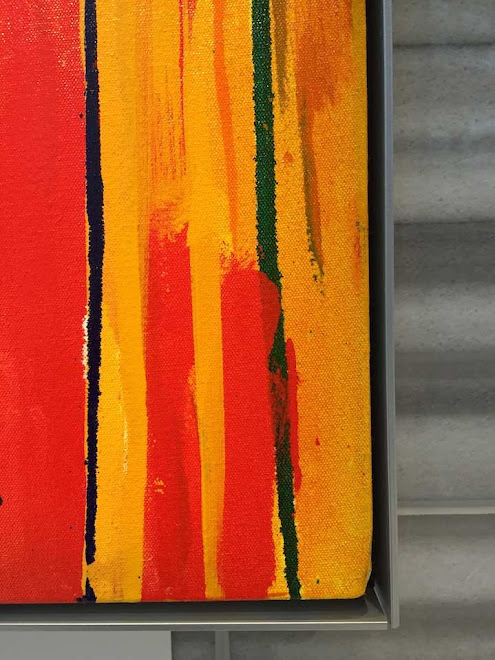 I say it’s almost an example of public art but I know it’s not in any part of the public domain. It’s clearly in the private space of a corporate tower. The windows on two sides of the lobby on Alberni and Thurlow make the big abstract painting seem accessible and inviting from the street.

On overcast days, the painting’s colours and shapes pop against the grey wall. Seeing such a big abstract painting in a corporate lobby is a rarity in Vancouver where figurative landscapes tend to dominate.

The painting is by Pierre Coupey, a Vancouver artist represented by Gallery Jones.

I talked to him by phone about the steps involved in making the painting and how it came to be located in the lobby of a corporate office building downtown.

Coupey said what was “scary” for him was that he was required to make a maquette – a small scale model of his proposed painting.

“That’s not the way I work,” he said. “I don’t do a little study and then work from it. I make a painting directly on the canvas.”

But he went ahead and made two maquettes, both at a quarter scale. He did one in cool colours and another in hot colours in different finishes. The property management company liked the cooler colours of the shinier finish.

“At a certain point, I put the maquettes away and didn’t work from them at all,” he said.

“I realized that (the property management company) was quite sophisticated and understood that I wasn’t going to reproduce the maquette they chose. They understood the artistic process. I make a painting completely from scratch and it follows its own logic in terms of its unfolding.” 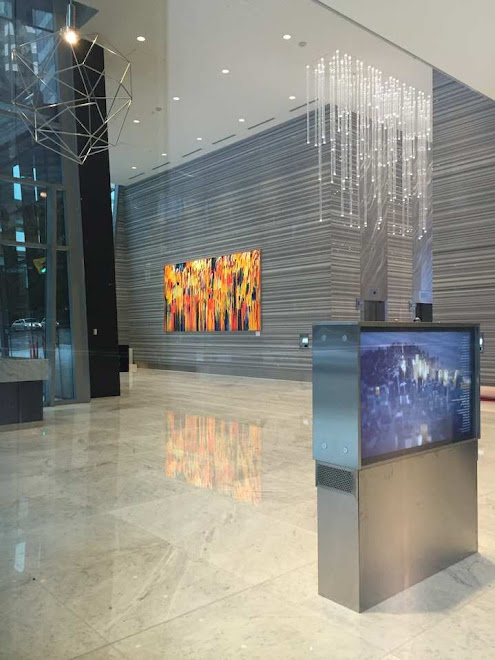 Because of the size of the painting, Coupey had to teach himself to paint in a new way.

“In the past, every time I hit the canvas, I would paint the whole surface,” he said.

“Sometimes I would paint the whole painting several times in a day. But with a painting that big, you can’t do that.”

Because of the painting’s size, he had to use a ladder to get up to paint the top. That meant climbing up and down and getting on his arthritic knees to paint the bottom.

Instead of painting the whole surface in one go, he would paint the blues, for example, and leave everything else alone. Or he focused on smaller areas.

“That was the only way you could paint a big painting like that,” he said.

“You had to in effect paint it piecemeal.”

Initially, when I looked at the painting I saw mostly the vertical orientation of the bright yellows, oranges and darker colours. It made me think of coloured rain. Someone else told Coupey it looked like an autumnal waterfall. The gestures begin in specific and defined marks that appear to decay as gravity pulled them downwards. They all looked very drip-like. But they’re not quite like that. As I looked closer, I could see gestures made from drips. But many if not most of the vertical lines aren’t drips. They’re strips of paint made from different layers of paint that create long, thin vertical lines.

As Coupey pointed out, the colours also cross the painting horizontally and diagonally to give the work a liveliness so the eye constantly travels over and around the surface.

Coupey, who was born in Quebec, said the painting’s colours are a mix of summer and autumn that recall his family’s country place in the Laurentians.

Images, top to bottom: all of Untitled XV by Pierre Coupey in the lobby at 745 Thurlow.
Photos by Kevin Griffin.

Kevin Griffin writes on culture and art for The Vancouver Sun, covering local, national and international exhibitions, events and issues in the cultural world.