Pierre Coupey is a painter with words. He is also a poet gifted with an unusual visual imagination. His Notations exhibition, shown at the Canadian Embassy Gallery in Tokyo during September and October 1998, provided ample proof that Coupey is one of those rare artists who excels in both poetry and painting.

A few other West Coast artists have had this double talent. Poet bill bissett painted. The late Roy Kiyooka began as a painter before branching into poetry. Neither match Coupey's exquisite colours or his use of technique, particularly in printmaking.

Curated by Paula Gustafson, the Tokyo exhibition is an attractive juxtaposition of Coupey's Notations series done over the last four years. The show includes major paintings, printmaking that incorporates some of his poetry, and several paintings done on paper in encaustic wax technique.

The best of the Notations are the big canvasses with their sensuous colours. Done in oil and then varnished in beeswax, the paintings have an antique lustre — and the trace of a sweet perfume. Notations 13, 14, and 15 hang side-by-side on one wall. Their sheer size (each is 254 x 228 cm) has a tremendous impact on the viewer in the cube-shaped Embassy gallery. The space has seldom been put to such good use. The smaller Notations 7 is a very appealing work with an especially pleasing symmetry. Each colour seems exactly in the right place: a flare of orange, a flash of red, shade of blue, then a patch of violet in the left-hand corner, balanced by a similar hue in the upper half of the painting. 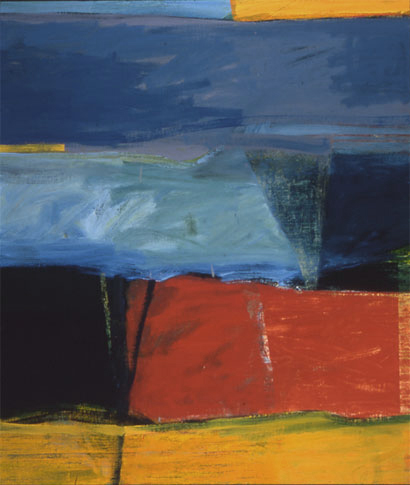 Of lesser effect in the exhibition is the Notations series created with the encaustic painting technique of oil and melted wax. Painted quickly because of the cooling wax, the pieces have also been stencilled with words and phrases that refer to other poets and their poems. “The The” in Notations 21 is a line from Wallace Stevens' poem. However, aside from “Je Tu Nous” in Notations 23, there are too few words in these five paintings to decipher their literary contexts.

Requiem Notations I – IX is an intriguing and cerebral print series combining some of Coupey's recent poetry with his printmaking. The nine prints hang in a 3 x 3 x 3 grid, their frames touching like an installation. Each print looks like the pages of an opened book. Centred on the left-hand side is a poem. Its counterpoint on the right-hand side is a matrix of wandering lines and even handprints. The poems in the Requiem Notations series are both commentary on the art process as well as on life. Notations III begins:

In a conversation with the artist in Vancouver in September 1998, he said that one of the struggles with his prints was over the relatively small point size he chose for the words in his poems. Each of the lines is just large enough to read without overpowering the rest of the monochromatic print.

A direct painter, Coupey eschews drawings or prefiguring of any kind in his art. Searching for the right colour associations, he paints, then repainting, moving across the canvas with his brushstrokes, laying on one colour, then another, pushing around the stuff of it until something clicks. His painting is an improvisation comparable to writing poetry. It is perhaps important to note here that, although Coupey is in his prime as a visual artist, his studies and initial efforts in the arts were in writing.

As a promising young poet from McGill University, he came to Vancouver in the turbulent 1960s and co-founded The Georgia Straight newspaper in 1967. He went on to teach in the English Department at North Vancouver's Capilano University where he started the literary journal, The Capilano Review, and published such writers as Robin Blaser, Phyllis Webb, and Michael Ondaatje.

Although he was known primarily as a poet and writer during the 1960s and 1970s, Coupey also painted. A Canada Council grant in 1968 for his second book of poetry, Circle Without Center, provided him with funding for a year of painting.

“One of the things I like so much about painting is that it is physical and that you are doing something.” Coupey explained. “Looking at the blank canvas is not quite the same as looking at a blank sheet of paper. They have so many intangible things in common in terms of process and in the way the mind works, and yet they are different activities.”

Since 1993 Coupey has been living in a home high on Sentinel Hill in West Vancouver where he has a panoramic view of West Point Grey and the mountains on the North Shore. His previous studio on Lloyd Avenue was near a riverbed, and the paintings he did there were inward-looking. The Notations series marks the change to a more landscape-based art for Coupey: to natural tones, to cinnabar reds, moss greens, the dark hues of evergreens, and aquamarine and indigo blues. But describing his work as landscape-based is misleading. He does not work directly form the landscape. He paints in a garage, with his canvasses standing upright against the wall. However, it may take him a month or more to complete one of his larger works and there is a cumulative effect of the landscape from walking in and out of his studio, pausing to take a break on the sundeck of his home, or contemplating the view while he smokes a cigar.

“You'll see some remarkable changes here,” he said. “You get a very intimate contact with the weather, with clouds, with mist, with the shifts of light. I hate to say it, but it is compelling.” He paused, then added, “I turned my back on it for a long time, insisting on the autonomy of painting.”

Notations marks a further watershed in Coupey's career because it is the first solo show he has exhibited overseas. His Tokyo exhibition is a considerable achievement because the Canadian Embassy Gallery mounts only six shows each year. The approximately 50 submission it receives annually are juried by a panel of embassy staff and, at least in Coupey's case, by a curator from the Tokyo Museum of Modern Art, a curator from the Hara Art Museum and an independent curator.

According to Bruce Barnett, the cultural attache at the Canadian Embassy, Coupey had to wait about two years for his show. Currently the gallery has a backlog of exhibitions scheduled until the year 2001. For other artists hoping to exhibit at the gallery, Barnett has some straightforward advice. “Artists should submit a good proposal, with photographs, references, and reviews of their work,” he said. Barnett also indicated the gallery was more likely to be interested in contemporary art than crafts. In the future, Barnett said, the gallery would prefer to show some touring exhibitions from Canada instead of relying solely on proposals juried in the annual meeting in Tokyo.

When Notations was finally selected for exhibition, Coupey was eligible for the gallery's $8,000 grant to exhibitors, as well as some assistance in translation costs and publicity through the Embassy newsletter, Culture Canada. However, Coupey had to arrange his own curator for the show and cover all additional expenses. Resourcefully, he drummed up 12 corporate and institutional sponsors to fund his air travel to Tokyo, accommodation costs prior to and during the first weeks of the show, as well as publication of an exhibition catalogue.

“Going around with your hat in your hand is not that much fun, but I found a lot of people who were willing to give as much support as they could,” Coupey said. “I worked like crazy on this show. I have an entire drawer in my filing cabinet just on this show. I think I could become a consultant on the process.”

Coupey lined up Air Canada as one of his sponsors. Other support came from the Capilano University Foundation, a non-profit foundation that was able to issue tax receipts for corporate donations. In the end, Coupey says he broke even on the show and he has since sold some of the works in the exhibition, although it was very difficult to get any coverage in the Japanese media. With hindsight, he realizes he could have made more sponsorship contacts if he had known about the Embassy's directory of Canadian businesses operating in Japan. Also, some of the 16,000 Canadians living in Japan and registered with the Embassy might have been able to assist in alerting local media interest in the exhibition.

Now, Coupey says he really wants to get back to work in his studio. “You can never lose sight of the work. The work is the argument,” he said. In the case of Notations, the argument is a telling one.

Gregory Strong divides his time between Vancouver and Tokyo, where he lectures at Aoyama University. He helped shape Toni Onley's autobiography, Flying Colours.