Do I hear Ovid’s echo in Echo’s Bones?

Poor Echo. Spurned by Narcissus, she left the world behind, choosing exile in a desolate wasteland of trees and crags, and there, neglecting herself, the heartbroken Nymph mouldered into the forest floor and was embraced by decaying leaves. Her bones, according to Ovid, transformed to stone. You may sometimes hear her voice on a gust of wind, but she is no longer among the visible. Her words are final words, cut short, bobbed, docked. In the emotionally complex and generous paintings he calls Echo’s Bones, Pierre Coupey reminds us that if we listen carefully, we can still hear Echo’s grieving cry, humanity’s cry; it’s a voice that scrapes the planet clean.

An artist is a hunter, a candler in a field of bones. Bones lie at the heart of hearing. The middle ear hosts three: the malleus, the incus, and the stapes. These tiny bones transform sound waves into vibrations conducted deep into the ear’s inner sanctum. Their Latin names recall the language in which Ovid composed the Metamorphoseon, his great poem of origins—a work composed in exile and in which he catalogued for the future all that might be lost. The paintings that make up Echo’s Bones reach deep into memory. It would be fair to say that these are haunted works, by which I mean that within their layers, in the act of painting and over-painting, they summon and discharge luminous traces of the dreams, ideals, and companions that have informed the artist’s life. Is Coupey suggesting with his title that the bones in the collective ears of contemporary culture have turned to stone? Not entirely. There is exuberance and joy in these canvases, flights of fancy, shards of the present, and homages to love and sorrow. 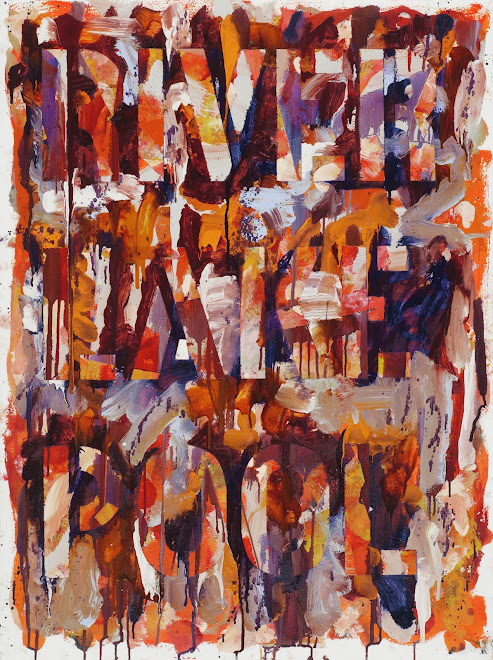 Born of a poet’s sensibility, these vibrant, rigorous works bear the scars of being seduced by and resisting nostalgia. They’re improvisational, muscular, teased from impulses both besotted by and in flight from recurrence and abstraction. They’re sensual, lyrical, sometimes angry; they track the hidden, the feared, the unrecognizable, and the longed for. Coupey often works on two canvases at the same time, initiating a conversation between the two. We encounter action and reaction, tenderness and ferocity, passionate duets between intellect and emotion. Their vertical fields are ripped by ribbons of bold, often fiery colour anchored by illusory fields beneath them; their vigorous surfaces release the beautiful, the eternal, and the unbearable. When we turn away, we are no longer strangers to ourselves, but we are no longer familiar to ourselves. Pierre Coupey is also pierre coupée.

The series may or may not pivot on the stencilled, fragmented, sometimes smudged words that act as tokens or anti-words, daring an observer to transform them into nouns or verbs. To cling to these signs, however, may send one plunging into the realm of self-referential Narcissus. Are they decoys? And if so, what are they trying to lure. Something always leaks out of stencilled letters. They recall consumption and war, packing crates, and military supplies. And how to interpret the gaps that break the cursive loops? Are they punctures, do they suggest the repulsion and attraction between two magnets? Are these signs meant to be cryptic? If something declares itself to be something, is it, or is it not? Who, or what, is one’s ally in the sacred glade of Echo’s Bones? 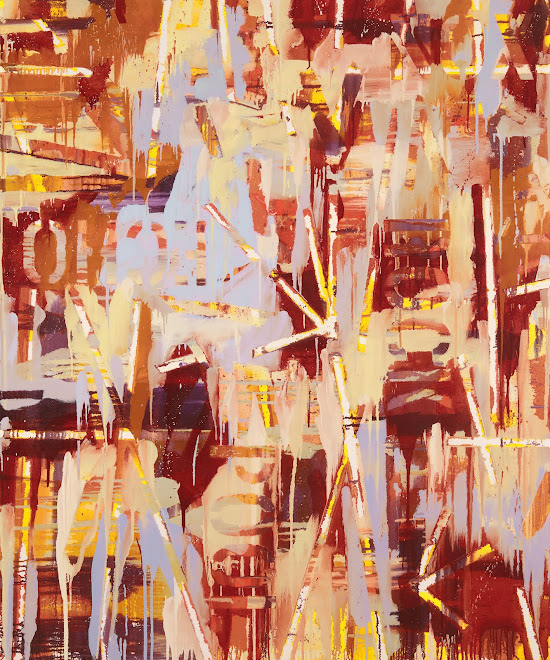 I have been interested in the dimensionality of these works, in the illusion of layered depths, and in some cases by the blue-grey ground—what I would call the fogbank grey of warships—that appears in some of the paintings as an inner layer or perhaps the inner sanctum in a forest glade. But I am being a romantic. The blue-greys tease me with an illusion of depth. Everything’s out front. Aspects of Jasper Johns may come to mind, his play with signs and the delight that comes with them.

Pierre Coupey is absorbed by colour, light, texture, and absence as presence. He works among ghosts, and they will not shut up. In their honour, the paint comes to life, rushing in and changing places with the world. These are works about consciousness and transformation, the central concerns of every era. In a recent vision I saw a figure reaching up with his hands, as high as possible, pulling at the black panel or curtain of the night sky, and, as he lifted it away, twinkling stars appeared. The surface may have been liquid; perhaps the figure was poking pinholes while reaching up into the darkness, feeling around for a little hatch, pulling it open—and to my surprise a beam of light appeared, a galactic spurt of Hera’s milk. Can the universe be held in the mind, and who or what do we glimpse when the world drops away like a rocket booster? Pierre Coupey returns to his studio each morning, picking up his brushes and his tools, and the threads of his daily interventions and conversations, feeling his way through densities and dimensions—and a world rich in allusion, opening hatches, releasing bright colour and light into the world. O throbbing world! Yes, I hear Ovid’s echo in Echo’s Bones.

Colin Browne is the author most recently of Here (2020), a collection of poetry, and Entering Time: The Fungus Man Platters of Charles Edenshaw (2016), a study of Haida artist Da.a xiigang’s three argillite platters depicting a crucial incident at the beginning of time. His collaboration with composer Alfredo Santa Ana, Music for a Night in May, was produced at the Vancouver East Cultural Centre in 2018, and a new song, The River of Hellos and Goodbyes, was by performed by Musica Intima in spring 2021. He and Alfredo are currently completing a new work, Aves: The Four Chambered Heart. Colin’s catalogue essays have appeared in Canada and internationally, and in 2016, he was the guest curator for the Vancouver Art Gallery exhibition “I Had an Interesting French Artist to See Me This Summer”: Emily Carr and Wolfgang Paalen in British Columbia. Colin has been a documentary filmmaker and an archival film historian working in the area of early Canadian and B.C. film production—he collaborates with filmmaker Harry Killas on the Pacific Cinémathèque’s “The Image Before Us” series—and was a co-founder of the Praxis Screenwriter’s Workshop, the Art of Documentary Workshop, and the Kootenay School of Writing, where he edited Writing magazine. Colin is Professor Emeritus in the School for the Contemporary Arts at Simon Fraser University where he taught film production, writing, and film studies. He is also on the boards of the B.C. Film Foundation and The Capilano Review and is completing a book about the Surrealist engagement with the Northwest Coast in the late 1930s.